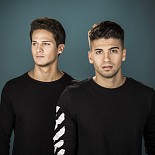 Born in Brescia, the brothers Alessandro (1990) and Andrea (1994) initially work on their own music. In 2011 they join forces and make their way into the studio, two years later after a series of releases and collabs, VINAI joins world renowned Dutch label Spinnin’ Records in 2014 and quickly comes up with its greatest hit up till then, the DVBBS collab ‘RAVEOLOGY’. Originally surfacing as a ‘track ID’ the song generates a huge amount of hype before being revealed a DVBBS and VINAI production.

From then, ‘RAVEOLOGY’ grows into a solid anthem for the worldwide dance generation, getting huge feedback from the world’s biggest DJs including Hardwell, David Guetta, Dimitri Vegas & Like Mike, Afrojack, Diplo, Showtek, W&W and many more. The full version of ‘RAVEOLOGY’ is premiered on Billboard, the world’s biggest music website and reaches #1 of the main Beatport chart in less than one week.

After this massive club hit, VINAI releases ‘Bounce Generation’ together with TJR. It’s the most played track during WMC and Ultra Music festival and reaches the number 1 position on Beatport after five days from release. Due to a lot of radio support and promotion, ‘Bounce Generation’ exposes VINAI all over the world.

2014 is the year VINAI turns into a global festival favourite. During the summer the brothers release ‘How We Party’ together with Dutch DJ R3hab, premiered live during Tomorrowland when VINAI joins R3hab on the mainstage performing a back2back DJ set. Six days after release it reaches the number 1 position on Beatport, completing an incredible record: three number 1 spots on Beatport in less than eight months.

Protagonists of an Italian wave of big room house, the brothers make their DJ Mag Top 100 debut by the end of 2014 at #62.

And then 2015 kicks in. VINAI hits #2 on Beatport's main chart with their collaboration with Dimitri Vegas & Like Mike ’Louder', throws in a heavy hitting remix for David Guetta, reworking his 'What I Did For Love' into #8 on Beatport's main chart, and takes on another remix for Steve Aoki, while gathering an amazing amount of support for their Spinnin' singles 'Legend' and 'The Wave' (#3 on Beatport main chart), receiving worldwide acclaim, played by just about every mainstage jock out there.

Meanwhile, the duo's touring schedule keeps filling up with headlining gigs, including festivals like Ultra Festival in Miami and Tomorrowland, Belgium.

This is followed by new single 'Techno', following the same triumphal path, as it gets picked up months before release by DJs like Hardwell, Tiësto, Steve Aoki + Dimitri Vegas & Like Mike and W&W.          For sure, VINAI has become bigger than ever -and it shows!

Into the Fire fest Anjulie