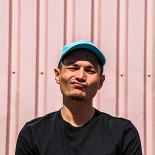 One of the best-kept secrets in Amsterdam has finally been told.

Everyone already knew that Rocky Wellstack knows how to rock the

decks and break down every club and festival as a DJ. But thanks to Diplo

and the Major Lazer crew, the whole world is about to find out just how

brilliant his own original productions are.

sets only, but after the great response, Diplo released the Festival Trap

remix to the world on the remix album of Peace is the Mission. Latest

Nicole Bus. In just one week it’s going viral worldwide. This is only the

beginning. Expect the unexpected collaborations and releases. As well as

many gigs in just the right venues like Jimmy Woo, Supperclub and

Paradiso and festivals like Defqon.1, Dance Valley, Dreamfields and Latin

Village to name a few; showcasing how the fusion of original UK sounds,